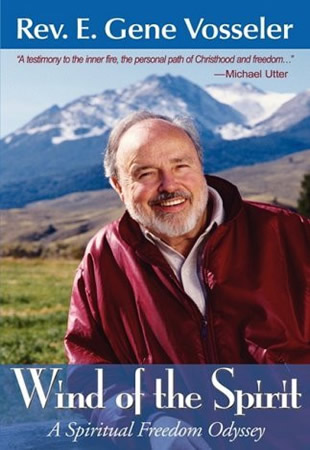 Wind of the Spirit

Wind of the Spirit is the autobiographical spiritual journey of Gene Vosseler spanning five decades -as a poet, minister, political activist, friend of freedom, and valiant defender of the faith. As Gene likes to say, Wind of the Spirit is an extraordinary journey by an ordinary man. Yet, when you read Gene’s sermons, his freedom messages or any of his many poems, you will recognize that Gene’s dedication, and inner wisdom is extraordinary. You will come to know Gene as the flame of freedom that speaks a friend of Christ and a respected spiritual elder. Formerly a fourth generation Lutheran minister, Gene ultimately broke free from Lutheran orthodoxy and discovered the teachings of the ascended masters and his guru, Elizabeth Clare Prophet. There he found the path to ever-lasting freedom and the love of his life, Wanda. Gene became a minister a Church Universal and Triumphant and a founding Elder appointed by El Morya. Gene traveled internationally to promote these teachings during which time he also counseled, baptized and married hundreds of community members. Gene also promoted the defense of freedom and of America, working with top Congressional leaders and other freedom fighters, inspiring many along the way. Wind of the Spirit honors our spiritual heritage and gives inspiration to those on the path of soul freedom and immortality. “Gene has done what everybody would like to do. He has taken Saint Germain’s message to the airwaves, he has taken it on television, and he has taken it to the newspapers.” -Elizabeth Clare Prophet “We commend our representative Reverend Gene Vosseler and his beloved wife, Wanda for their great service to us and to America…What they have done, you can join them and do also.” -Saint Germain “Thank you, Gene, for a lifetime of friendship and for providing such a worthy example of striving for righteousness.” -Michael Utter.