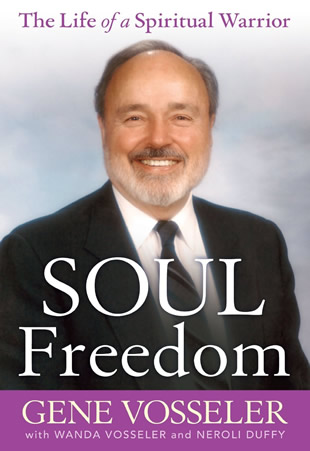 Soul Freedom: The Life of a Spiritual Warrior

Rev. E. Gene Vosseler has been a warrior of the Spirit and a devotee of the Christ and the Buddha for decades. As he has walked this path he has seen his life unfold in three distinct phases. The first was his youth and service as a fourth-generation Lutheran minister. In those thirty-eight years he served as a missionary in British Guiana, raised five children, and built a thriving church in Hawaii. It was a life of outer success. But it did not feed his soul. The second phase was a time of “divine dis¬content.” He left the Lutheran church, explored Taoism, became a Unitarian minister for two years, was arrested with Joan Baez in an antiwar protest, studied under a Buddhist master, and built and lost a multimillion dollar corporation–all in a twelve-year search for spiritual truth. The third phase began at the age of fifty, when Gene found the ascended masters and his spiritual teacher, Elizabeth Clare Prophet. He also met his twin flame, Wanda. He says this was when his “real” life began. The mystic in Gene found expression as he travelled all over America and the world with a message of higher consciousness. He became a minister again, taught Buddhism and Taoism at Summit University, took on leadership roles, and went through the inner tests and trials of chelaship and the spiritual path. The warrior in Gene would take on anyone–from Marxist professors to movie stars to the political establishment in Washington–in the defense of the truth as he saw it. In this book Gene candidly reveals his inner walk as the mystic and the warrior became one. It is the story of an ordinary man and his extraordinary life–a spiritual warrior and his personal quest for Soul Freedom. The life lessons he shares can assist each of us in the liberation of our own soul.